Hi everybody! I’m Mike McCrory and this is Wood U Make It. So, I’m in the process of updating a kitchen and I’ve made 10 kitchen cupboards so far and I have one more to make and that’s the most complex because it’s the corner cabinet that’s going to house the sink and I thought that would be an interesting video to show. But before I do that, it’s starting to get a little chilly out out and I want to finish installing this heater that I just got.

This is a NewAir heater and it’s nice because it comes with a bracket to hang it from the ceiling or from the wall.

I’ve already installed the wall bracket This is nice because it can rotate and it has some little louvers that you can use to direct the airflow in the direction that you want. According to the instructions, it’s supposed to be 6 feet off the floor this is probably 5 1/2 feet. I think that’s close enough. What I like about it is the size. It’s a lot smaller than the one I had last year and this one didn’t have any convenient way of hanging it from the ceiling so I’m pretty happy with this one.

I’m going to plug it in and give it a try. It gives off heat pretty quickly. It’s rated to heat a workshop that’s 500 square feet. Mine’s about 400 square feet so it’s a perfect size for me. If you’d like to get one of these I have a coupon code down below.

You can purchase online from NewAir directly. Just enter the coupon code of WOODUMAKEIT and you’ll get 20% off. So…

let’s get started with the cabinet . When I made all of the other cabinets I cut all of the side panels at the same time so that all the cabinets would have the same depth. So, I’m using one of those pieces to cut to the length that I need here which is 30 1/2 inches. I’m using a stop block set at 30 1/2″ and that way both of the side pieces will be exactly the same length. In this case consistency is much more important than the accuracy of the cut.

I measured the first cut and it turned out to be exactly 30 1/2″ so then I can proceed with cutting the next panel. On all the other cabinets I applied an edge banding that’s 1/4″ thick but in this case, I’m going to be beveling this edge with a 45 degree bevel so I’m applying a full 1″ of edge banding. I’ll clamp the edge banding on the side panels and then I’ll set them aside while the glue dries. While the glue is drying, I will cut the top and bottom pieces of the cabinet using my track saw. The cabinet is going to be 42 inches long by 42 inches wide and it will have a standard cabinet depth of 24 inches.

I’ve cut the first 42 inch side and now I’m cutting the next 42 inch side. Then I’ll set my guide to a 24 inch depth and then I’ll go ahead and cut a 45-degree angle across the front. Then I’ll do the same for the bottom piece. Now that the side panels have glued up I am cutting a 45 degree bevel on each of the pieces.

For the back of the cabinet I’m using a 1/2″ sheet of plywood and I have this template that I’ve set up so that I can consistently set my dado blade to the right height and the right thickness and the right distance from the fence.

So, all I do is I set this template over the dado blade, raise the blade up until it touches the board, and then I’ll slide my fence across. 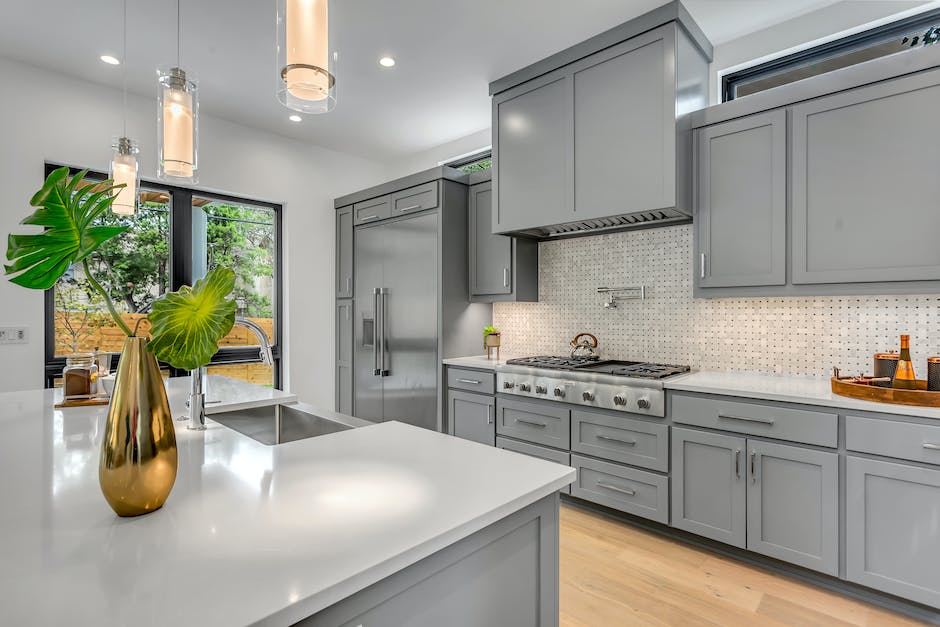 When I’m cutting the dados I like to ensure that I get a consistent depth of cut and to do that I run each piece of wood through the dado blade twice making sure that I press down vertically on the board while it’s running through the dado blade. You can see this piece of plywood in particular is not very flat so that’s why it’s important to run it through twice to make sure that I really get enough pressure on the board to get that consistent cut that I need.

I’m also going to cut a rabbet along the top and the bottom of the side panels and I’m using that same template to set the distance between the blade and the fence. And then again I’m running the boards through twice to get a consistent cut.

Now I’m cutting the two back panels and in one of the panels I’m cutting a rabbet so that the two panels can interlock. Then before glue up I want to make sure that I’ve sanded the interior of the cabinet because it’s a lot easier to sand it now before it’s assembled than it is after it’s all glued up.

Now I’m gonna glue the cabinet together and I’m gonna move fairly quickly because I want to make sure that everything gets in place so that I can clamp it up before the glue sets. I have just a couple more pieces of edge banding to attach and in this case because the cabinet is going to be painted I don’t hesitate to use a brad nailer to make it quick to assemble. Then I’m attaching a couple of strips of 1/2″ plywood along the back and this is where I will screw the cabinet into the wall.

Now I’m spraying on the finis. Normally I would like to be doing this outdoors but it’s just too cool outside to be spraying on a finish like this.

I’m using Sherwin Williams Kem Aqua Plus finish which is a cabinet grade finish. It comes in two parts. The first coat is a wood finisher kind of like a primer with regular paint and the second coat is the final finish.

The wood surfacer is white kind of like a primer and the final color that I’m using — it looks very similar on camera — but it’s it’s actually kind of a light grayish green colo. OK, so the cabinet is installed and it’s ready for the countertop. One thing that I found really challenging was installing the hinges and it’s something I didn’t foresee but it’s because this is on an angle so if this has been a face frame the cabinet it wouldn’t have been a big deal because the face frame would be perpendicular than the end of the frame would be perpendicular to the opening but in this case the hinge is installed on a 45 degree angle so I made my first attempt by installing the hinges according the instructions that I wish I had foreseen this problem because I would have done it with a test piece of wood instead of on the actual door.

So, by following the instructions, I was supposed to set back the hinge cup by 1/8″ from the edge and it turned out that by doing that I had a huge gap here in the corner in two directions — coming out from the face of the cabinet and in from the side. So I had this probably 1/8″ or almost 1/4″ gap in the corner here that was unsightly so I had to patch the hole that I had drilled here for the cup and I just use a plastic wood for that and I ended up setting the hinge cut back 1/2″ from the edge instead of 1/8″.

That’s a little bit more than the hinge can handle. These are 165-degree hinges. They don’t open all the way but I get a good in the 90-degree opening even though it’s already on a 45-degree angle so I’m getting about 135 degrees which is not too bad. I also had to set the hinge plate further inside the edge of the cabinet than what the instruction said so it was a little bit of trial and error. But, anyway, I thought that would be worth pointing out because it’s actually not that easy.

If I was going to do it again I would probably make this cabinet a face frame cabinet even though everything else in the kitchen is frameless. I think it would still look okay. So, I gotta ask…

. Would YOU Make It? [theme music playing].

No comments to show.